“DOWN SYNDROME CAUSES SUFFERING”, a headline reads. When I look at my beautiful two daughters I know this is a blatant lie. Politicians, medical professionals and industry are cultivating fear to market tests that continue to harm the Down syndrome community.

I dedicate my first article to my beautiful daughters April and Hazel. ‘May you grow old in a world where one day, everyone is wanted for the person who they are.’ 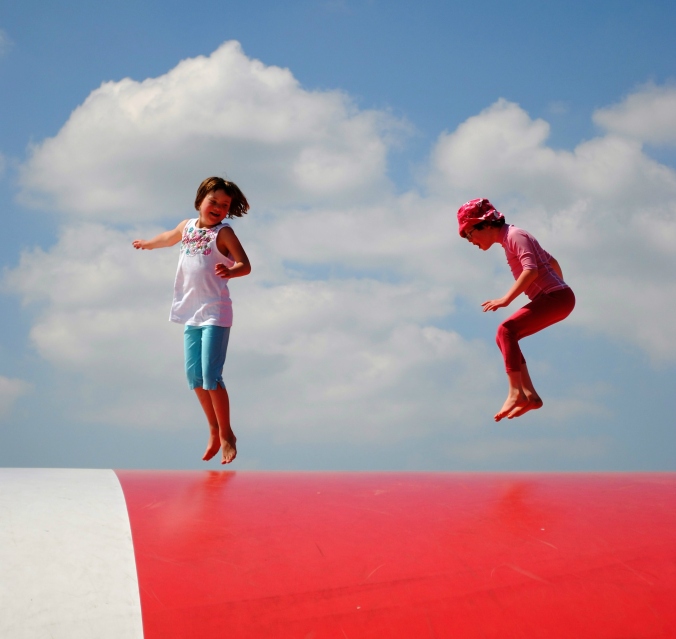 An inconvenient truth: people with Down syndrome are very happy being themselves.

If you asked my daughters April and Hazel what life is like (with Down syndrome), they would probably give you their undivided attention for a few moments. Hazel would likely start telling you about her friends in school, her little brother Olav, her favorite foods and people in the world (babies). The story might get increasingly hard to follow and likely end in laughter and a high five. April will gaze at you solemnly from behind her glasses. Searching her brain for the proper words to express her feelings, she will be pensive for a while as in meditation. You will start to notice the freckles on her cheeks and tiny nose. Then, as she delicately wraps her arms around your shoulders, a smile will radiate like a ray of sunshine from behind that earnest look.

My daughters don’t suffer because they have an extra chromosome. Sure the road to fluent speech, flawless writing, and coordinated bicycling is often filled with obstacles, but they don’t let it ruin their day, much less their lives. They are consumed with more important stuff like Saturdays’ dance recital or Sundays’ soccer game. Of course, like any kid, mine can drive a mother insane. Hazel can be stubborn as a mule and April can take an hour to get dressed. But they also have the ability to simply accept their flaws and those of others without judgment and to fully enjoy life. In my opinion, that makes my daughters perfect.

A few decades ago Down syndrome was considered a life limiting condition and people with Down syndrome were often housed in institutions. Many were in poor health, had limited self-care and social skills, couldn’t read, and died young. It was thought their problems were caused by their DNA and unavoidable. This offered justification for some to offer prenatal screening en selecting Down syndrome to women who were considered at an ‘increased risk’.

Down syndrome could be considered an ‘acceptable genetic variation’.

Social and medical advances have profoundly changed what it means to live with Down syndrome and other disabilities since then. Today people with Down syndrome are living longer and healthier lives and it seems clear they were limited at least as much by institutionalization, low expectations, lack of education and poor health care as by their DNA. They are increasingly finishing high school, living more independently and holding jobs. In fact, by usual medical definitions and standards, Down syndrome cannot be considered a ‘serious condition’. Think average IQ, life expectancy and other life limiting factors. In today’s framework, Down syndrome could be considered an ‘acceptable genetic variation’.

Rather than discussing ending prenatal screening and selection for Down syndrome, the opposite is happening: from technologically limited tests offered to few, prenatal screening is now routinely offered to all women in the United States and abroad while advanced genetic technology is introduced. Misperception and outright denial of the advances made for this group of people sharing similar physical characteristics abounds in media and medical ‘opinions’. From assumptions about financial dependence, low earning power and generating suffering. By targeting a portion of society (Down syndrome) for elimination it creates and reinforces stubborn outdated stereotyping in society.

If we, as a modern society, value the right to be ourselves, un-judged and free to make our own choices, we should wish the same freedom and rights for our off-spring.

My daughters are not a mistake or a reflection of my personal choice but full-fledged persons and a crucial part of society. They may not become the first female president of the United States (but who will?), it doesn’t mean they have other, important, talents. So often are people with Down syndrome accredited with the ability to be open, accept life, live in the moment and to spread love, simplicity and joy. In fact, people with Down syndrome, as a group, were nominated for the 2014 Public Peace Prize for their ‘real ability to diffuse peace around them’.  These human traits are needed more, rather than less, in today’s fast paced, money and self-centered society.

Eliminating people with Down syndrome from society doesn’t say anything about their inherent worth. It says everything about societies inability to appreciate or accept human differences as part of the whole.

“We all need to feel wanted for the person that we are. So take good care of each other” Fred Penner, Canadian Children’s music performer sings. That’s the message we should pass on to our children.

About the author: Renate Lindeman is a Mother of two children with Down syndrome, Writer, Disability activist, A representative for Saving Down syndrome and spokesperson for Downpride. Renate is the former president of the NS Down syndrome society.